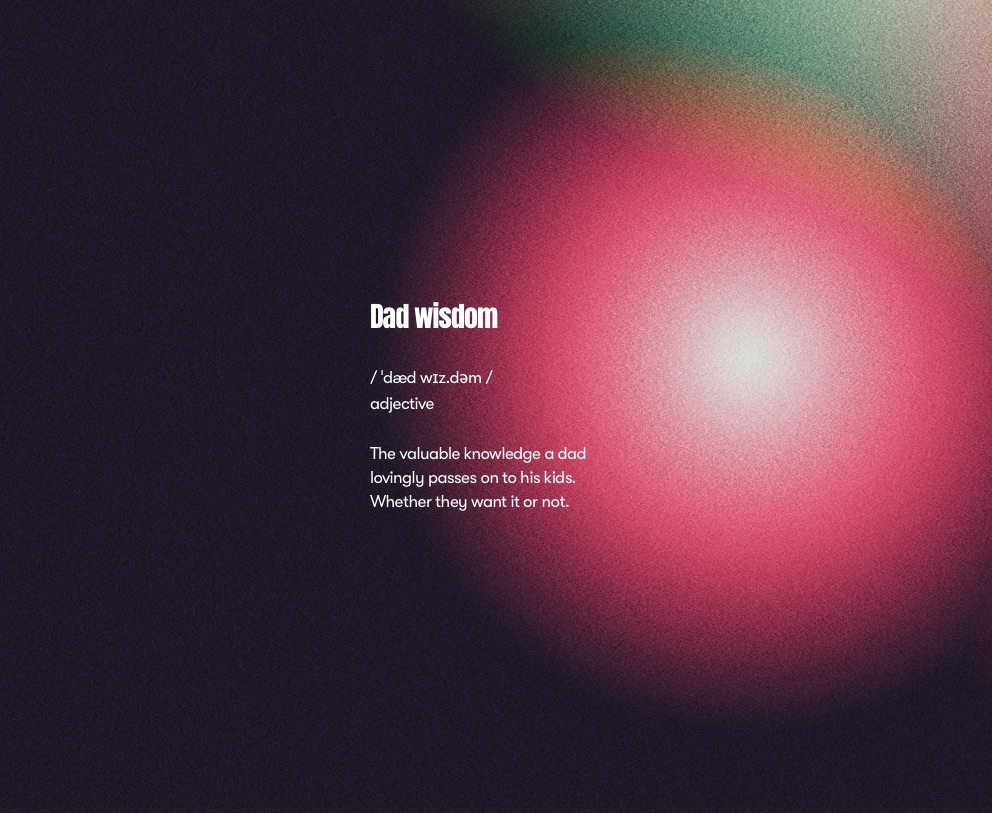 Good wisdom is timeless. That type of savvy horse sense that’s passed down in the repeated words of your papa’s papa’s papa. Near perfect diamonds of insight chanted and polished through the ages. But they come with a caveat…If you’ve been entrusted with them you gotta keep them alive. Like the eternal winding of grandad’s pocket watch. But before we see what these everyday plaid-shirted men of the world have to say; a quick public service announcement…

Now, dad’s have been getting a lot of stick lately. One minute they’re hailed as chest-beating-tyre-slinging Romeos. The next: Idiotic beta males who trip over their own shoelaces. Wow, what a time for testosterone! But that doesn’t take away from the fact that they know their onions. They’ve been there and done it, twice. And they can deal with the name-calling. Maybe it’s time to listen to them. End of rant.

There’s nothing quite like Wikipedia to help you out when need it. So what follows is just us passing on their collective knowledge on the subject of…Oral traditions.

“Oral tradition, or oral lore, is a form of human communication wherein knowledge, art, ideas and cultural material is received, preserved, and transmitted orally from one generation to another The transmission is through speech or song and may include folktales, ballads, chants, prose or verses. In this way, it’s possible for a society to transmit oral history, oral literature, oral law and other knowledge across generations without a writing system, or in parallel to a writing system. Religions such as Buddhism, Hinduism, Catholicism, and Jainism, for example, have used an oral tradition, in parallel to a writing system, to transmit their canonical scriptures, rituals, hymns and mythologies from one generation to the next”.

You can’t pick this stuff up in the playground. It’s something that’s absorbed in the home while being around the adults. Little tidbits of life experience dropped at the dinner table, in the car or through the bedroom door. Whether it’s preachy, corny or a perfectly timed reality check. Dad advice sticks. Why? Because it works.

Passed on to us while our brains were still young and spongey the innate power of these seeming banal statements burst forth the moment we need them. His jokes may be painful yet there’s solace in the punchline.

Now let’s get down to the nitty-gritty. Some wisdom. We’ve asked around and the grown-up boys and girls have spoken. We’ve put together some of our favourites to get the tongues wagging. But this list has no end. And we would love for you to send in your dad’s wisdom and we’ll immortalise it right here with the other porch-step pronouncements.

Dads the floor’s yours:

The four words no dad really wants to say and no child, however old, really want to hear. It means the wisdom was imparted but ignored or misunderstood. So what’s the best way to pass wisdom on to the next generation without it getting lost in translation. Here are 10 tips to help out the wisdom-givers and receivers”.

Giving dad’s their due.

We’re all a little wiser for having you around.

Let us know what you think.